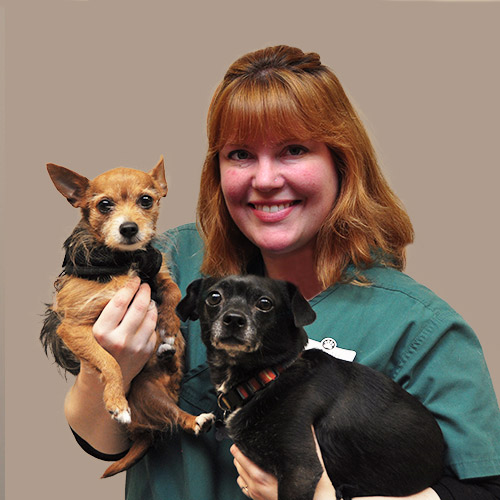 Sarah is excited to be a part of the North Shore Family Pet team! She has been working in the veterinary field for over 15 years. Sarah began her career in shelters, and she has since worked in both general and specialty practices from Portland, Oregon to Portland, Maine. After completing her undergraduate degrees in History and Biological Sciences, she obtained her Veterinary Technician Certification from Madison, Wisconsin. During her free time, Sarah spoils her Chihuahua mixes, Lamar and Lenore, and her cat, Nia. 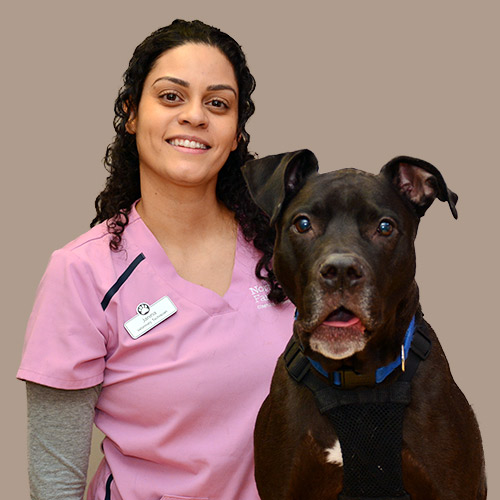 Janina is thrilled to be part of the North Shore Family Pet team! She has been working in the veterinary field since 2008. Janina graduated with honors from Chicago State University, earning a B.S. in Biology with a minor in Chemistry. She has a very handsome and zealous pit bull mix named Tux. Janina aspires to one day go on an African Safari! 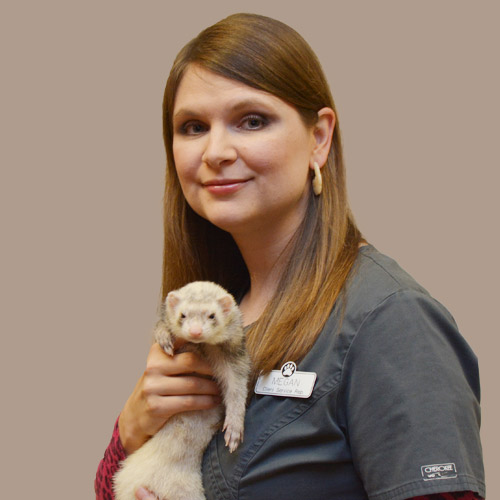 Megan has been working as a Veterinary Client Service Representative since 2002. Her favorite part of working at a veterinary office is seeing patient issues through from beginning to end. She currently has one ferret named Bleu and a cheerful Pit bull named Briggs. When not at work, she and her boyfriend enjoy cooking, gardening, boating, and taking Briggs swimming. Megan is our resident 'Green Thumb'! All the beautiful plants in our lobby are under her wonderful care. 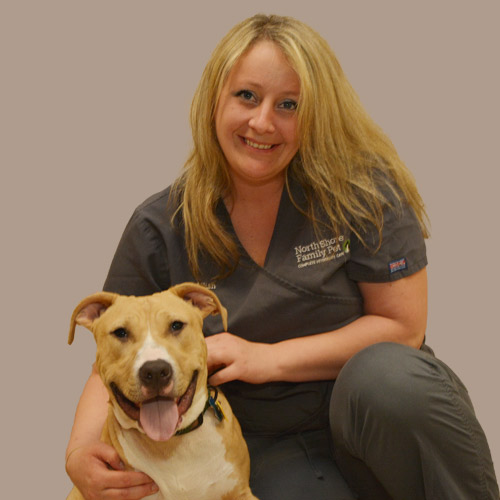 Jillian has worked in the veterinary field since 2000. She began her career at emergency and specialty ophthalmology centers. We welcome Jillian to her first veterinary general practice: North Shore Family Pet! When she is not at work Jillian enjoys spending time with her three sons: Brandon, Dylan, and Joey and her 4-legged kids, Turtle "Herbert", two cats "Gary" and a sweet cat "Luna" and an energetic, sociable Pitbull puppy named "Miller". As a big fan of the NFL, Jillian is always looking forward to the next season! 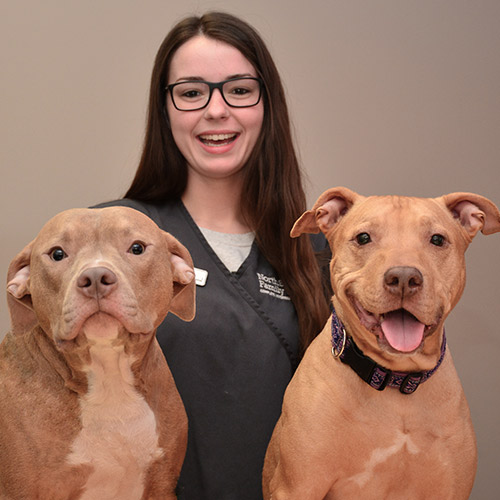 Emmy is delighted to be part of the North Shore Family Pet team! All of Emmy’s previous professional experience revolves around animals, whether in a medical setting or canine socialization setting. Emmy has a passion for canine preventative care and behavior. She particularly enjoys observing interactions with humans. Perhaps Emmy will someday pursue dog training or a specialty certificate in canine behavior. Emmy has two adorable dogs, a sweet pitbull named Diesel and a darling American Staffordshire Terrier named Dazey. Both are rescued, and Dazey underwent successful training to become dog friendly and has becomee a productive member of canine society! Emmy is leaving the country for the first time in 2018 for a trip to Mexico. Other travel goals include Greece and Italy. 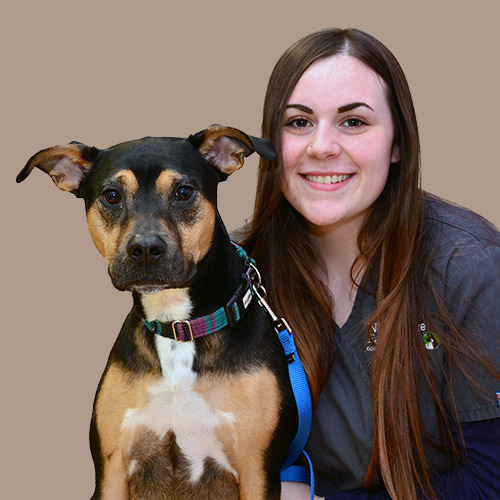 Marisa grew up in a household that valued animal health. By working on her family’s ranch, volunteering at animal shelters, or helping out at family veterinary clinics, Marisa developed a passion for helping animals. What she particularly enjoys about the veterinary industry is witnessing the bond and love people share with their pets. Marisa is considering pursuing a degree in veterinary nursing. Marisa is the proud mommy to Opie, an active and goofy Doberman mix. In her spare time, Marisa likes hiking and other outdoor activities, as well as museums and art walks. 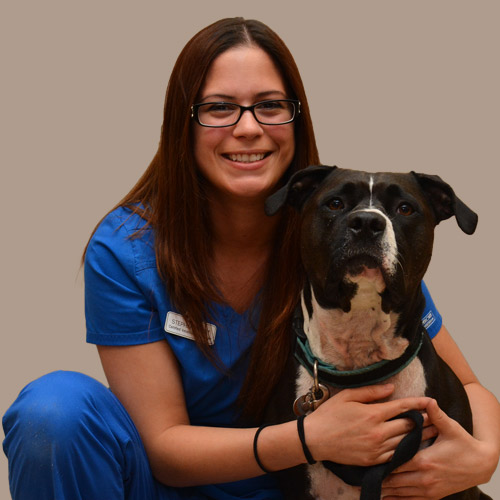 Stephanie has been working in the veterinary field since 2007. She attended Parkland College, where she obtained her certification in veterinary technology in May of 2011. Throughout the years, Stephanie has developed a passion for emergency medicine. She has experience working in both general practice and emergency. In her free time, she enjoys playing Frisbee and fetch with her two very energetic dogs, German shepherd Sarge and pit bull Jake. She also likes taking trips to Colorado, where she can snowboard. Congratulations to Stephanie who just passed the national board exams to become a Certified Canine Rehabilitation Practitioner! 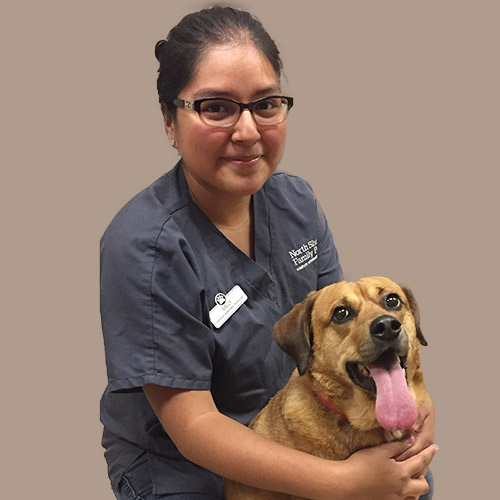 Sally graduated in 2015 from the Veterinary Technician Institute at Fox College with an A.S. in Veterinary Technology. Before joining North Shore Family Pet, Sally worked for two years at a clinic that also treats avian and exotic species. Sally is excited to put her small animal skills to use on a daily basis. At home, Sally has two dogs: Shady, a German Shepherd mix, as well as Martha, a Puggle who she rescued in 2013. Together, they like to go on walks, bike rides, and play fetch. During Sally’s free time, she likes to go on long bikes rides with her dad, running, cooking with her mother, and building memories with her siblings. Sally likes to travel and is looking forward to one day traveling to Paris, Hawaii, and Bora Bora. Sally is fluent in English and Spanish. 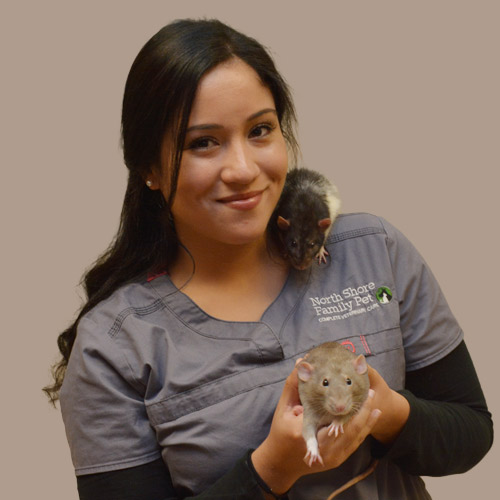 Shirley was born and raised in Perú. She graduated from the Vet Tech Institute at Fox College in May, 2014. Over the years, Shirley has been volunteering and completing community hours at various animal hospitals. She has two rescued cats, Sizzle who loves to learn tricks and socialize, and Penny who is sweet but shy. Shirley and her husband welcomed baby girl, Emilia, to their family in 2016. Her dream vacation is to visit the Great Barrier Reef in Australia and learn to scuba dive with sharks. Shirley is excited and thankful to be part of the wonderful team at North Shore Family Pet! Shirley is fluent in English and Spanish. 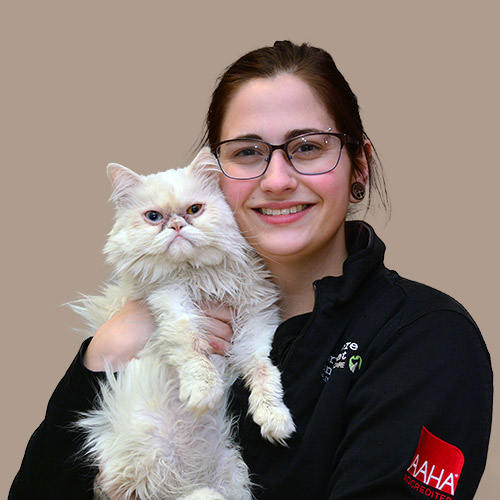 Anna started working in the veterinary field in 2014 as a kennel assistant. She graduated from the Colorado Academy of Veterinary Technology as a Certified Veterinary Technician in 2018. Her clinical hands-on experience has been with emergency and critical care medicine. In the future, she plans on obtaining a specialized degree in Emergency and Critical Care veterinary medicine. She looks forward to improving her skills and furthering her career at NSFP, and especially appreciates how every patient is treated as an individual and is cared for with such compassion. Anna and her family have a myriad of furry friends. Her cats are Nala, Cheshire, and Anubis. Her dogs are Duncan (rott/shepherd mix), Bella-Rae (blue heeler), and Nacho (pom-chi). In her spare time, Anna enjoys music, drawing, and fostering difficult animal cases. A particular goal of hers is to travel and volunteer with animals in developing countries. 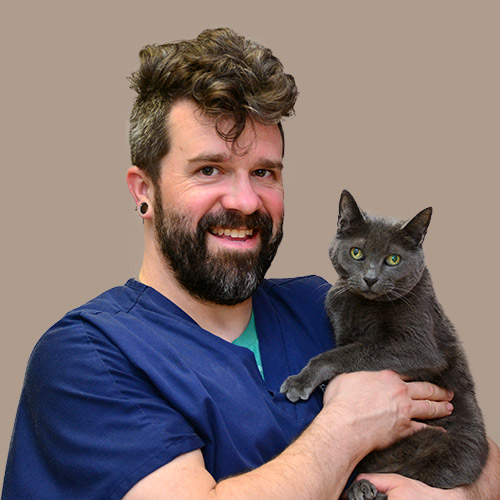 Nate and Dr. Bannow have been working together since 2008. Nate started working as a veterinary receptionist in 2004, and began training as a veterinary technician in 2007. Nate came to veterinary medicine after working ten years as a teacher’s assistant for special needs children. Although he enjoys working with all animals, Nate does admit to a fear of birds! On his time off, Nate plays with his spunky cat "Weezer", and is an avid reader and cinephile. 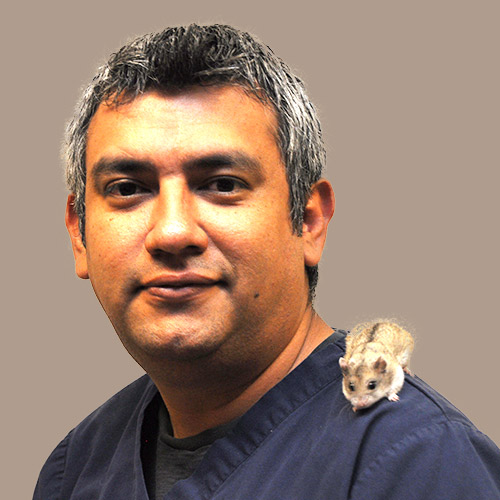 Francisco was born in Guatemala. He has been happily working as a veterinary technician for more than 13 years. He is proud to be a part of the great family at North Shore Family Pet. He enjoys spending his free time with his three lovely girls: his wife, his daughter Emily, and his Pomeranian mix Ruby. Francisco also loves watching Spain’s soccer league; being a die-hard Barcelona and Argentina fan, he never misses a game! Francisco is fluent in English and Spanish. 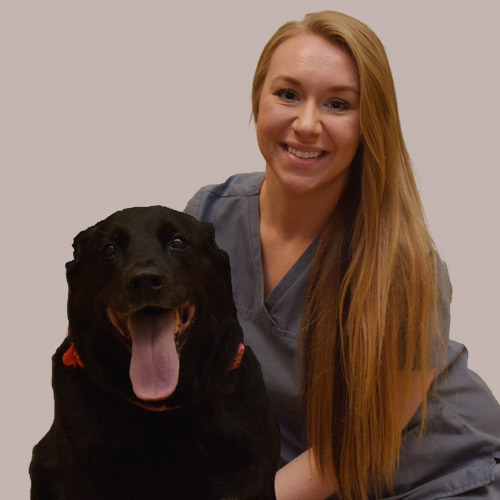 Emily has been working in the veterinary field since 2013. She plans to complete her veterinary technician certification soon. She currently studies Biochemistry at Loyola University. Emily enjoys everything about the field of veterinary medicine, but takes a special interest in ultrasonography. At home, Emily has a 12 year-old black lab named Bella who still has the heart of a puppy! She looks forward to filling her life with many more animals as time goes on. Emily's favorite part of working at NSFP is the friendly and incredibly knowledgeable staff. She is always learning something new! Her favorite food is pizza, which she cannot resist! Emily is fluent in English and Polish. 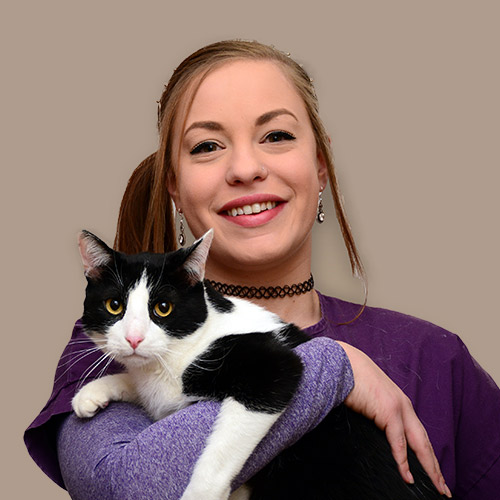 Allie has been working in the veterinary field since 2011, and she is very enthusiastic about working alongside the staff at North Shore Family Pet! Loving animals of all shapes and sizes, Allie has worked with not only cats and dogs but with exotic animals as well. Allie continues her veterinary education with special interests in oral hygiene, weight management and rehabilitation. At home, she has a Pomeranian named Charlie and three formerly feral cats, Milo, Ella & Barney; all of whom she loves dearly. In her spare time, Allie enjoys long hikes and adventures in the local forest preserves. She also loves to draw in her sketchbook and play video games. 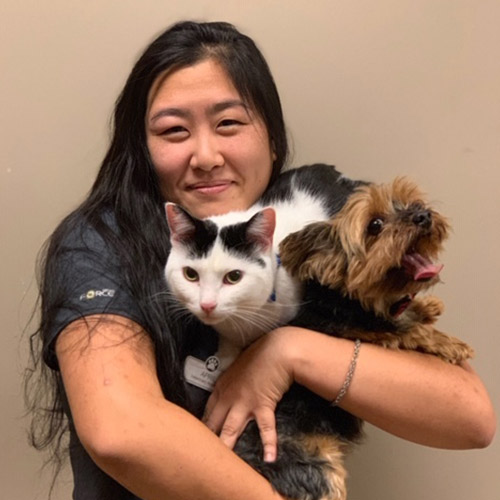 April joined NSFP in the summer of 2019 and we are thrilled to have her as part of the team! April has worked in veterinary medicine since 2015. She will soon begin classes to become a certified veterinary technician. She is particularly interested in surgical and anesthetic procedures, and also enjoys bonding with pets during outpatient appointments. In her free time, April enjoys drawing, painting, knitting, and gardening. Someday, April would love to go hiking in Ireland and Scotland. Currently, April has a smart little Yorkie named Mr. Tutu (named for the date he was adopted: August 22nd) and two cats: Steven and Garnet (both named for the cartoon Steve Universe). April is fluent in English and Korean. 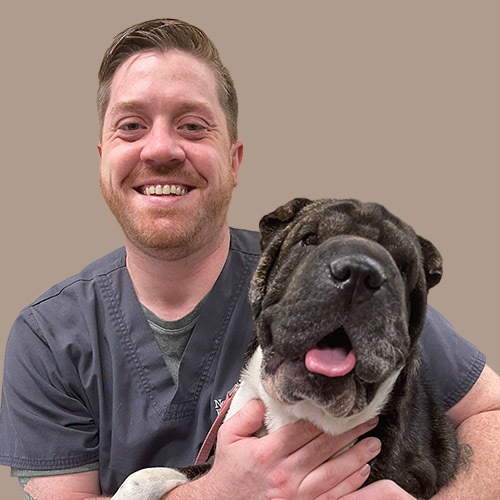 John joined the United States Army after high school and travelled the world. He states during all his adventures and experiences, his interactions with the clientele and pets of North Shore Family Pet Hospital have been the most rewarding. John hopes to formally complete a veterinary technician program in the near future. From a young age, John has felt drawn to animals, their training, and healthcare. After growing up with Great Danes, large breed dogs hold a special place in his heart. When he isn’t studying veterinary medicine, John is playing the card game Magic the Gathering, hanging out with his nephew, and following the Dallas Stars hockey team. John also enjoys travelling to Michigan with his feisty Shar-pei, Holly. 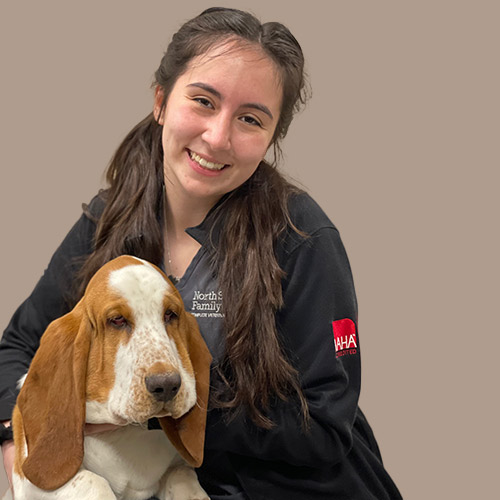 Kaitlyn joined the NSFP family May 2020 as an assistant, and we are so glad she did! She is currently enrolled at DePaul University as a business major and she’s hoping to combine her passions for photography and helping animals into a career one day. Kaitlyn says her favorite aspect of NSFP is the love and respect displayed by her coworkers; everyone treats patients as if they are their own pets. During school breaks, Kaitlyn visits family in Florida and roots for her hometown heroes, the Cubs. Although she doesn't currently have any fur-babies of her own, Kaitlyn enjoys lots of snuggles with the awesome dogs and cats of NSFP!